An unmanaged retreat in Java

At the beginning of the Covid-19 lockdown in March 2020, we decided to practice some of our GIS skills to pass the time. Jakarta had recently experienced flooding from the heavy rain during the wet season and we wanted to investigate further (see our other blog article). Using Sentinel 2 satellite data, we were able to develop a False Color Image (FCI) to highlight vegetation in the city. However, during the course of this exercise a much more interesting issue came to light.

North-east of North Jakarta, there is a peninsular sheltering Jakarta Bay to the east (Figure 1), here the Citarum River meets the sea. It was also here that our satellite imagery appeared to show an extensive area reclaimed by the sea. Through analysis of the satellite images, we were also able to detect inland water levels, and identifying which areas are vulnerable. The peninsular is extensively used for aquaculture and fish farming with many square and oblong plots evident. A dyke system links up with the plots and possibly provides seawater on each tidal cycle. It was also clear that the seaward coastline had been breached in a couple of places and land had been reclaimed by the sea. 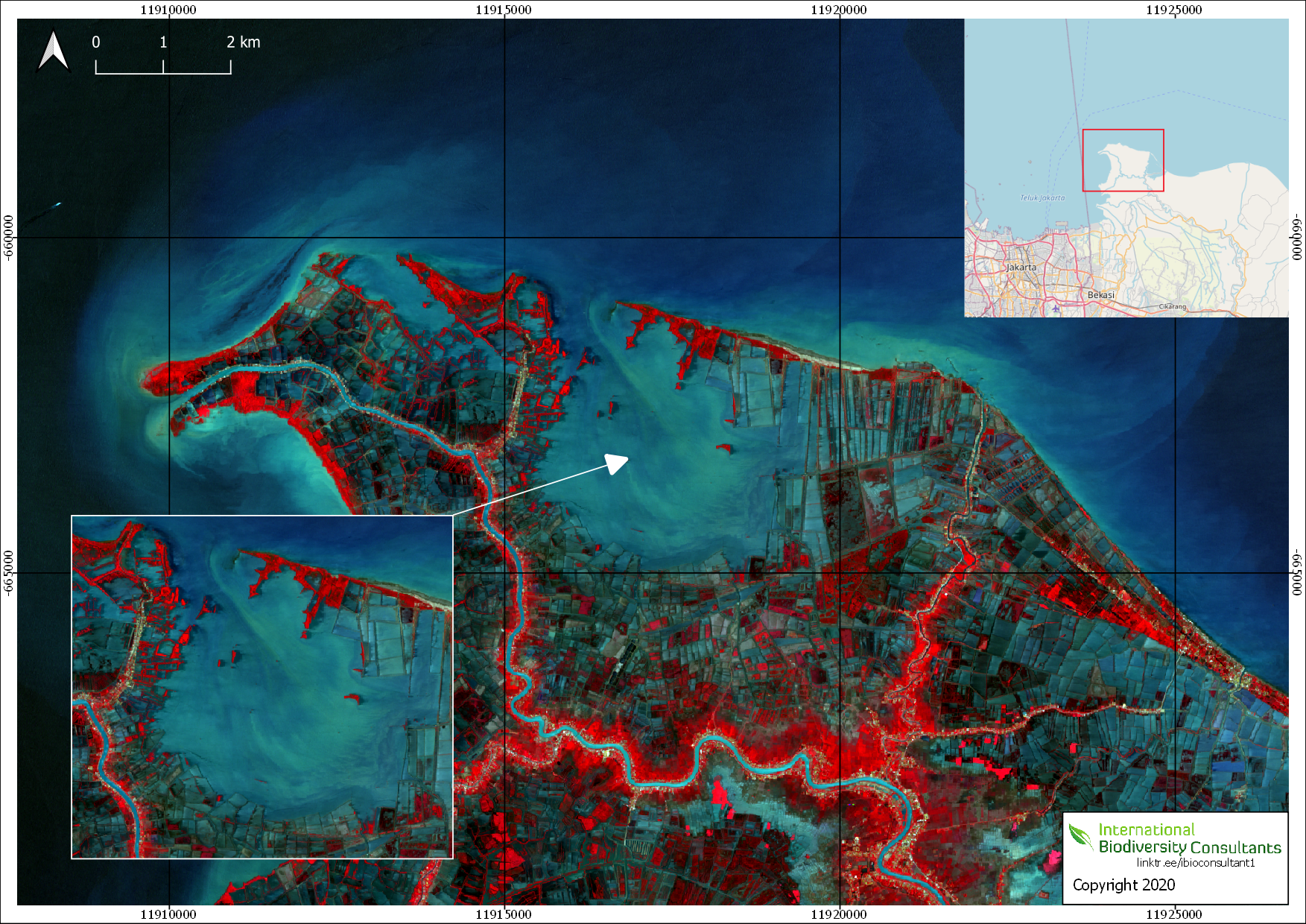 Figure 1. A Sentinel 2 False Color Image (FCI) satellite picture highlighting vegetation in red. The area is North East of Jakarta (North Java) showing in the center of the map a strip of coastline which has been breached by the sea and has flooded an inland area. Click on image to enlarge.

As global warming increases temperatures, sea level rise is impacting more around the globe, but especially to countries on the equator. This is well known and so we didn’t do much more with the maps, thinking that flooding in Jakarta city was where the focus laid. That is until Nivell Rayda (1), a journalist with the Channel News Asia covered a story on the peninsular and the people who struggle to live and work there (2).  Nivell’s article does indeed reveal that the area of West Java was an epicenter for aquaculture supplying fish and shrimp products to Jakarta and its close proximity meant the area thrived. So successful was this trade that some farmers were earning up to US$10,000 every few months giving it the nickname ‘Dollar kampung’. People were attracted to the area and as a result, new farms and more farms were established. Today, this stretch of coastline is dominated by aquaculture. Talking with locals at Beting Village, Nivell found out that changes started to happen from 2008. Once breached, the sea quickly reclaimed the land as erosion processes destabilized the former coastline letting more seawater in.

Further analysis by IBC has identified that a storm surge may have occurred in 2010. Investigation via Google Earth archive of historical images identified that an abrupt change occurred between July 2010 and August 2010 (see Figure 2.). A check of online historic weather conditions for this time and place helped identify a tropical storm event which occurred on 7 July 2010 at midday with northly winds up to 56 mph (Figure 2).  It’s possible that the storm helped further widen the breached coastline and large losses of land followed over a relatively short period of time.

Figure 2. Google Earth screenshot from July 2010 (left) and a screenshot from August 2010 (right) showing a coastal breach possibly caused by the freak tropical storm of Wednesday 7 July at 12 midday with northly winds up to 56 mph. Right: a screenshot of dateandtime.com with weather conditions for 7 July 2010.

Nivell states up to 6,000 ha have now been reclaimed by the sea. Villagers are fighting back by replanting mangrove trees in the hope that this may slow, stabilize or stop the erosion. However, aquaculture ponds by their nature require excavation of the ground to establish the boundary of the plot. Tidal forces are no match for loosened ground made of soft sediments.

Beting village is not the only location, around the coast close to Kali Pangkalan on the edge of North-East Jakarta (Figure 3), the same processes can be seen as ponds are eroded away by the lunar tide cycles. 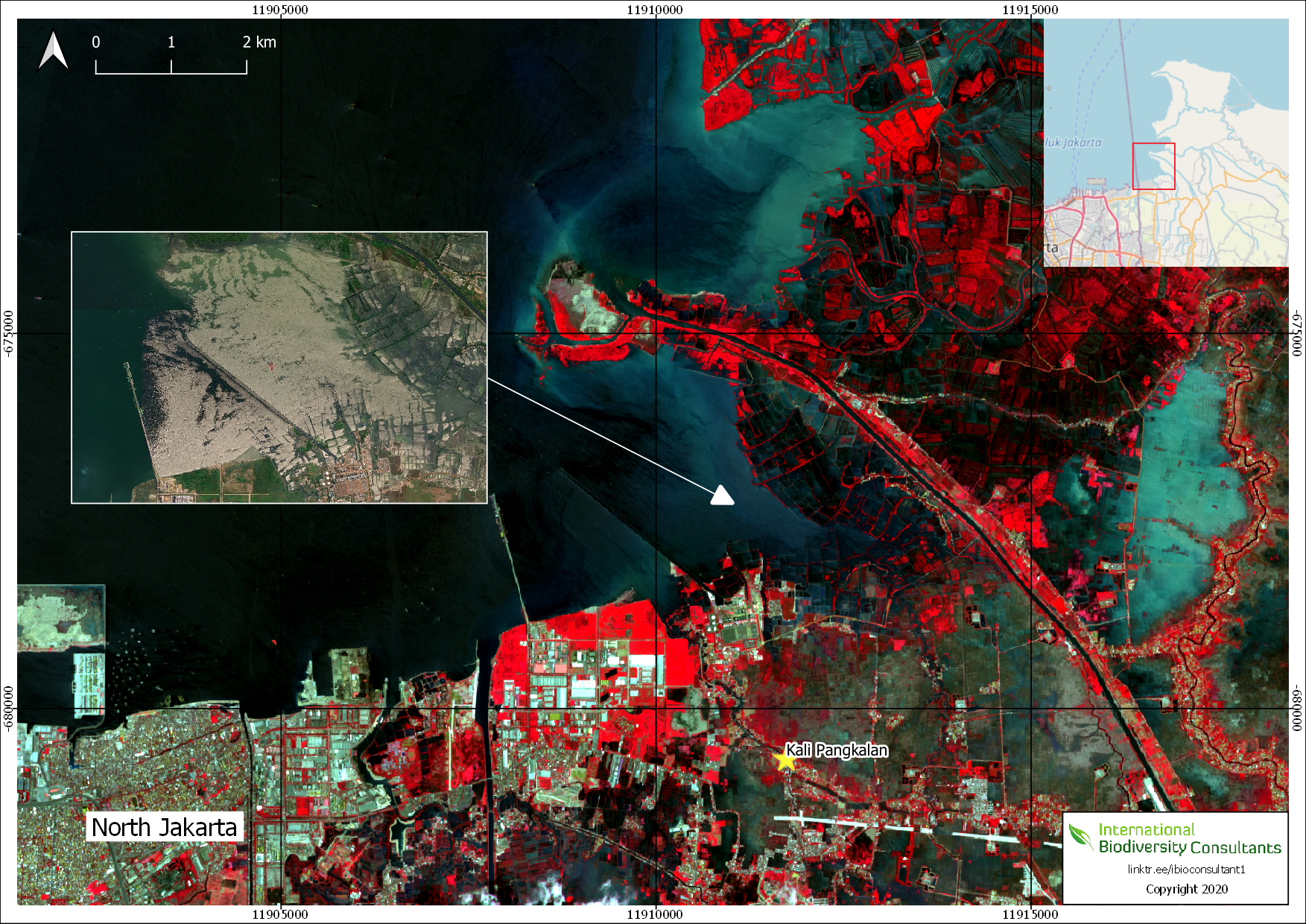 Java and Indonesia are crowded places, land is productive and heavily utilized for food production. People from coastal communities impacted by sea level rise are not only loosing homes and livelihoods, they are also having to relocate and enter a crowded market elsewhere. While flood defenses are a critical focus for Central Government, efforts are mainly focused on North Jakarta as a center for commerce, industry and residences (4) and a city with its own sinking problems too.

All in all, Indonesia possibly needs to ramp up the scale of Nature-based Solutions (defined by IUCN as “actions to protect, sustainably manage and restore natural or modified ecosystems…”) and large-scale planting of mangroves could be one solution to utilize which would also benefit marine ecosystems and biodiversity.

About the Author: Dr. Phil Rogers is an international environmental and biodiversity specialist and is Director and Lead Ecologist for International Biodiversity Consultants Ltd. He is currently working in South East Asia and is based in Jakarta, Indonesia.